✕
"A woman without a man is like a fish without a bicycle" G. Steinem

Feminism is a range of social movements, political movements, and ideologies that aim to define and establish the political, economic, personal, and social equality of the sexes. Somehow, to this day there are many in the Western society that shy away from defining themselves as pro-feminists, and many even oppose it. In fact, feminism is still a very controversial and politicized topic.

In this project, we aim to shed a light on the evolution of feminism between 2015 and 2020 and its relation with the media, using the Quotebank dataset. In particular, we would like to analyze the media coverage that feminism is receiving, both in terms of volume and sentiment. Furthermore, we will try to understand whether feminism is also being applied in practice by each media outlet.

The dataset used for our analysis is the Quotebank dataset that consists of 178 million unique, speaker-attributed quotations that were extracted from 196 million English news articles. As the investigated topic is feminism, some related quotes are extracted by making use of key words such as “feminism”, “patriarchy”, “sexism”, “misogyny”, “misandry”, “gynocentrism”, “rape culture”, “slut shaming”, “women’s rights”, “toxic masculinity”, etc.

Below is a representation of the words present in the 20’052 quotes obtained. As the size is proportional to the frequency, we notice that these quotes are mostly about women and men, people’s opinions (“think”) and some recurrent feminism related sub-topics (“sexism”, “patriarchy”, “misogyny”). 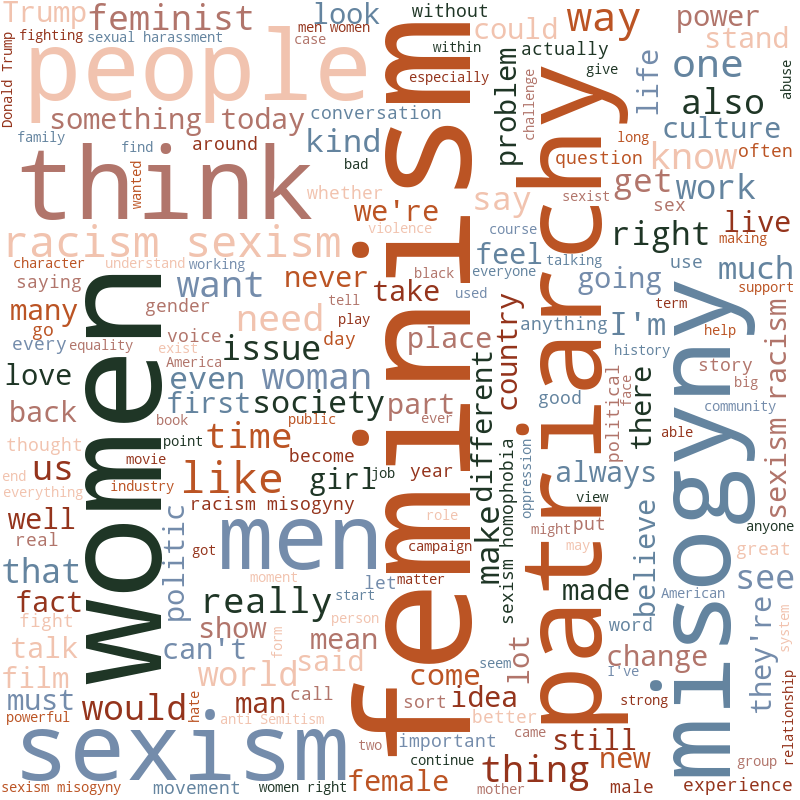 First, let’s see if we can gain insight on the coverage of feminism over time in the medias through the Quotebank dataset. Later on, we will compare between medias from different sides of the political spectrum. 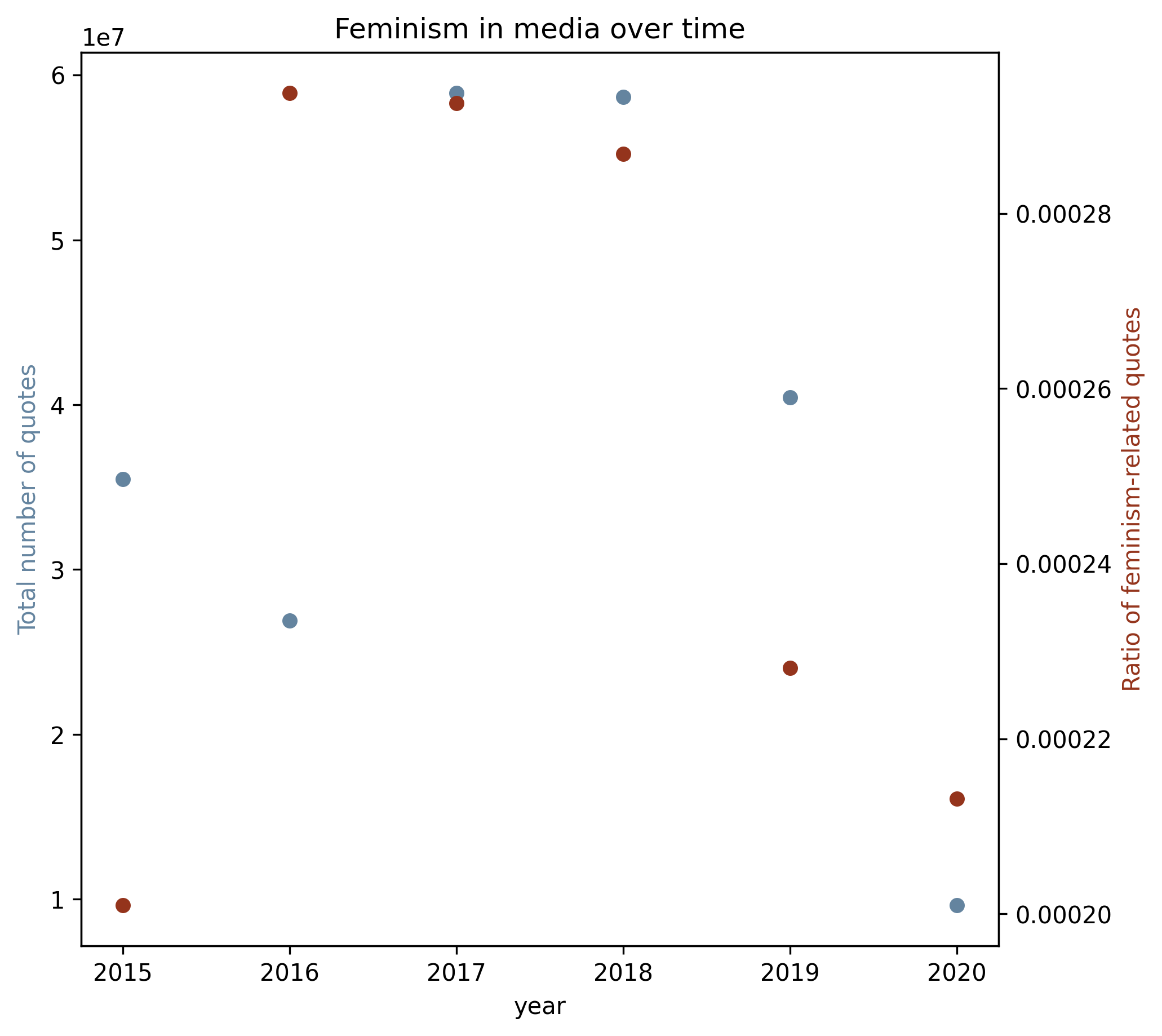 We can see that the ratio of feminism-related quotes is highest for the years 2016, 2017 and 2018. What events could have caused an increase in the reactions of speakers over feminism at these periods?

All these historic episodes might explain the presence of a higher number of feminism-related quotes as people were probably keen on expressing their opinion and medias quoted them as well as those who were part of these events.

To compare between medias with different political orientations, let us first define the medias of interest. In the subsequent analysis, we will mainly focus on a subset of medias based on the AllSides Media Bias Chart.

Now that the medias of interest have been defined together with their political orientation, let’s see how do they compare in terms of ratio of feminism-related quotes. Intuitively this should get an indication of the exposure that media outlets give to feminism.

While we can’t find a correlation between the political orientation and the exposure given to feminism from the plots above, it is interesting to see that The Federalist (right-wing) has the highest number of feminism-related quotes with respect to its total number of quotes for the years 2015, 2017 and 2018. Furthermore, The Blaze and Washington Examiner are also right-wing and center-right respectively. Generally, the left-wing is characterized by an emphasis on ideas such as freedom, equality, fraternity, rights, progress, reform and internationalism while the right-wing is characterized by an emphasis on notions such as authority, hierarchy, order, duty, tradition, reaction and nationalism. Accordingly, we doubt that The Federalist actually has a feminist agenda. In fact, just talking about feminism doesn’t mean talking about it in good terms. Also, a media outlet could be very well quoting feminist speakers, just to heavily criticize them and promote an opposite view.

Let’s have a look at the topics covered in these feminism related quotes.

The above LDA model is built with 8 different topics where each topic is a combination of keywords and each keyword contributes a certain weightage to the topic. Each bubble on the left-hand side plot represents a topic. The larger the bubble, the more prevalent is that topic.

Based on the salient keywords, we can guess a possible topic. Topics 1, 2, 3, 4, 7 are clustered in one quadrant and some of them overlap. On the other hand, 5,6 and 8 are situated in 2 different regions and there is no overlap.

The topics in the upper right quadrant are centered around feminism which is the central theme of this analysis. Also, many quotes seem to mention personal opinions (think, believe) and wishes (want). Others touch upon gender rights and equality between men and women and the movements these can generate (women fighting for their rights or against misogyny/patriarchy, etc.).

Topics 5 and 6 are centered around the fear of people that are perceived as different and their discrimination (racism, sexism, homophobia, misogyny, xenophobia, anti, hate). Notice how America’s ex-president’s name is also mentioned in topic 5. This may allude to the fact that some of these quotes mention opinions on his behaviour and character.

The last topic (8) revolves around the two politicians Donald Trump and Hillary Clinton and most probably the man’s gender based attacks. The ex-president has been accused several times of misogyny and sexism in attacking Hillary Clinton because she is a woman. Therefore, the emergence of such a topic is not surprising. 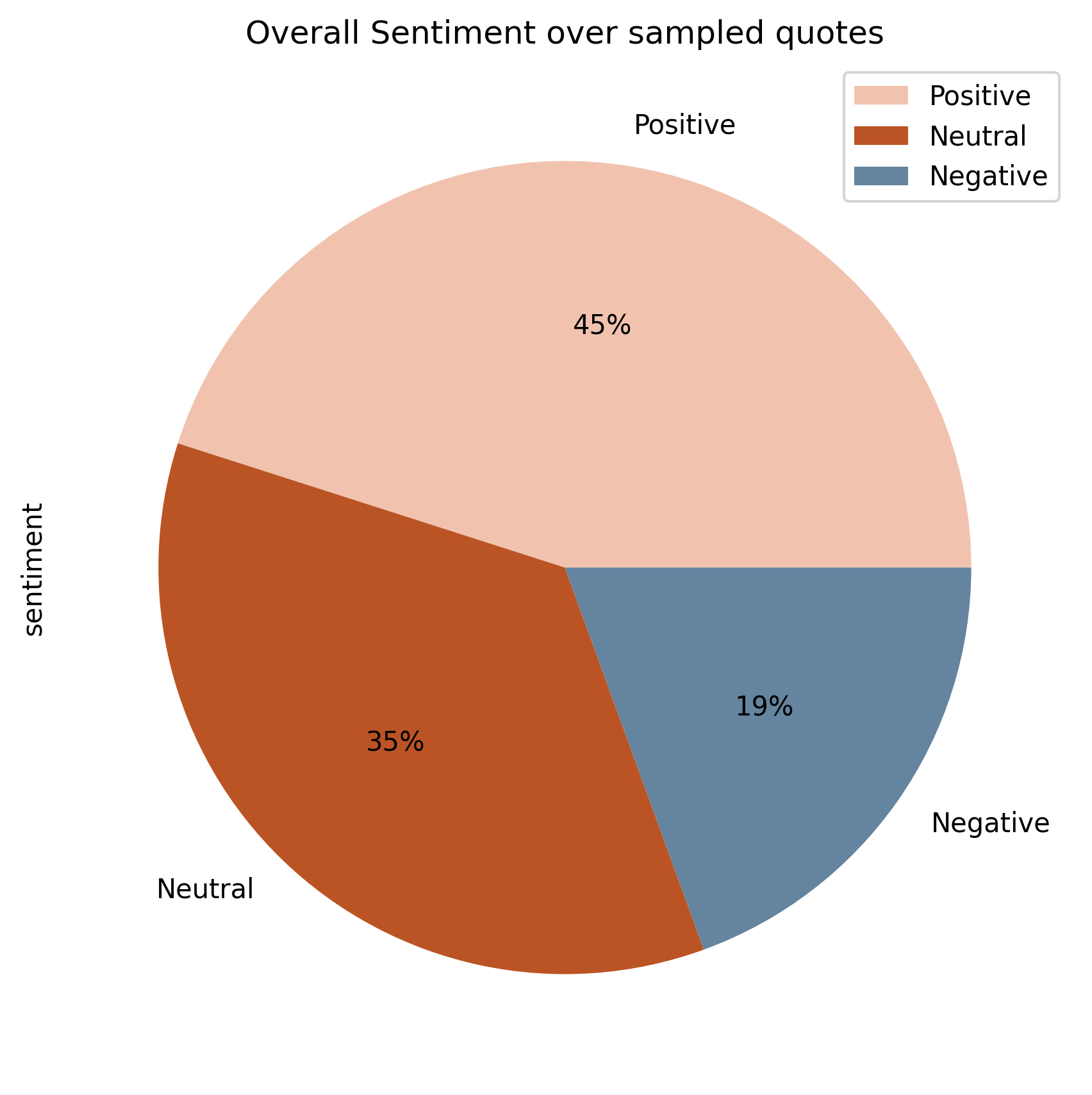 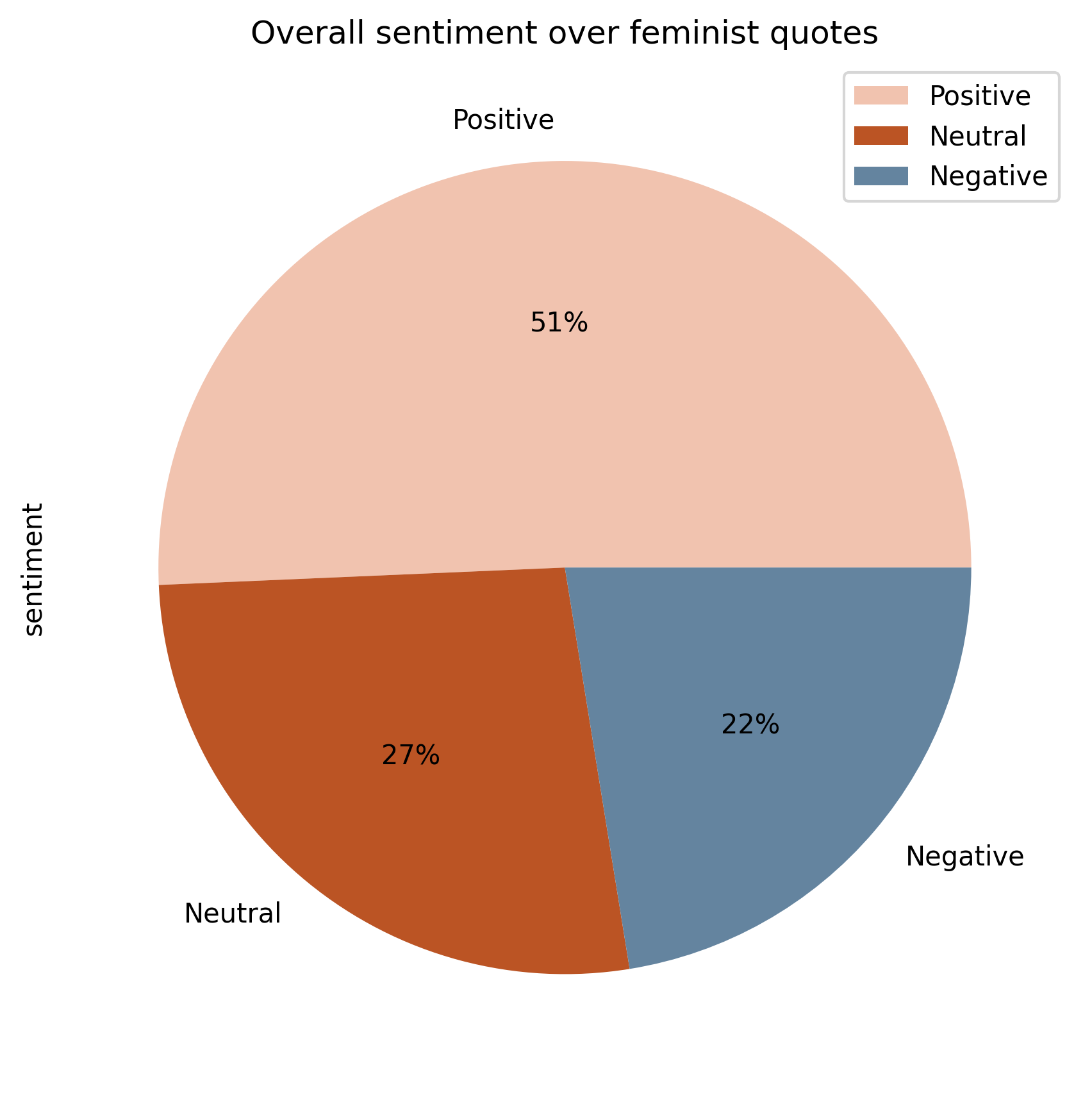 Let’s select the top 10 speakers, i.e. those that have the highest number of feminism-related quotes in our database and see how these speakers tend to talk about feminism. In the plot presented below, we notice that the speakers that use negative words the most are Donald Trump, Bernie Sanders and Piers Morgan. On the other hand, Hilary Clinton, Emily Ratajkowski, Emma Watson and Lena Dunham are the ones that tend to speak the most positively about feminism and its subtopics. 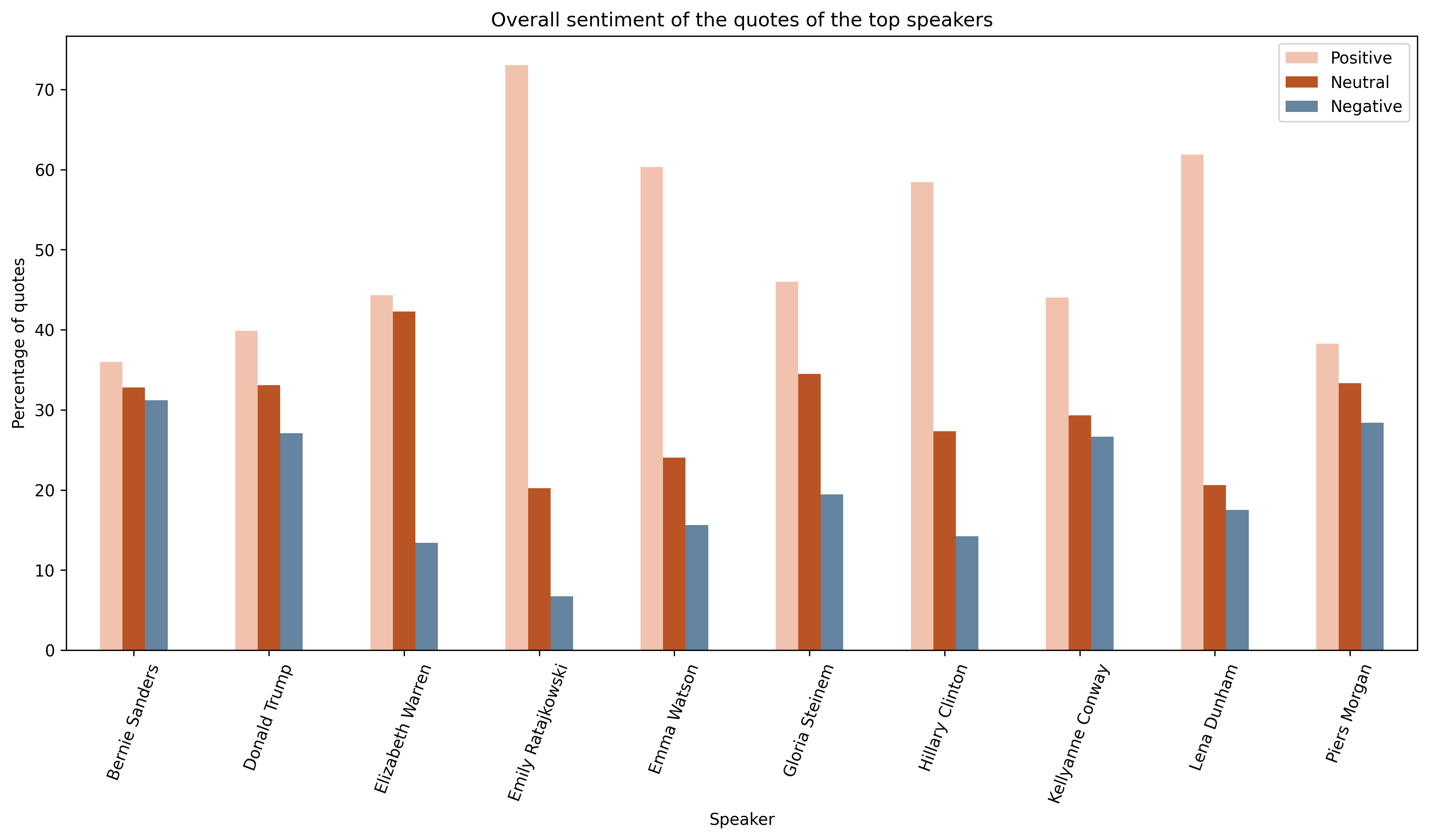 Having studied the sentiment over feminism and its sub-topics, we now investigate gender equality “in practice”. Let’s have a look at what exposure is given to female VS male speakers in the selected medias.

The plot above shows a significant difference between the male and female quotes exposure in all the chosen medias. In the majority of cases, about 80% of the quotes are male which highly contrasts with an approximate 20% of women quotes. The media that quotes women the most is buzzfeed (a left-wing media), but the male quotes are still predominant. The Washington Times (a right-wing media), on the other hand, chooses to put forward mostly male speakers.

After obtaining the quotes that mention women (“she”) and men (“he”), we have represented the respective percentages per media (see plot above). From the two previous plots, it can be clearly seen that not only these medias cite more men, but they also include more quotes that talk about men.

What about the speakers from the feminism dataset? 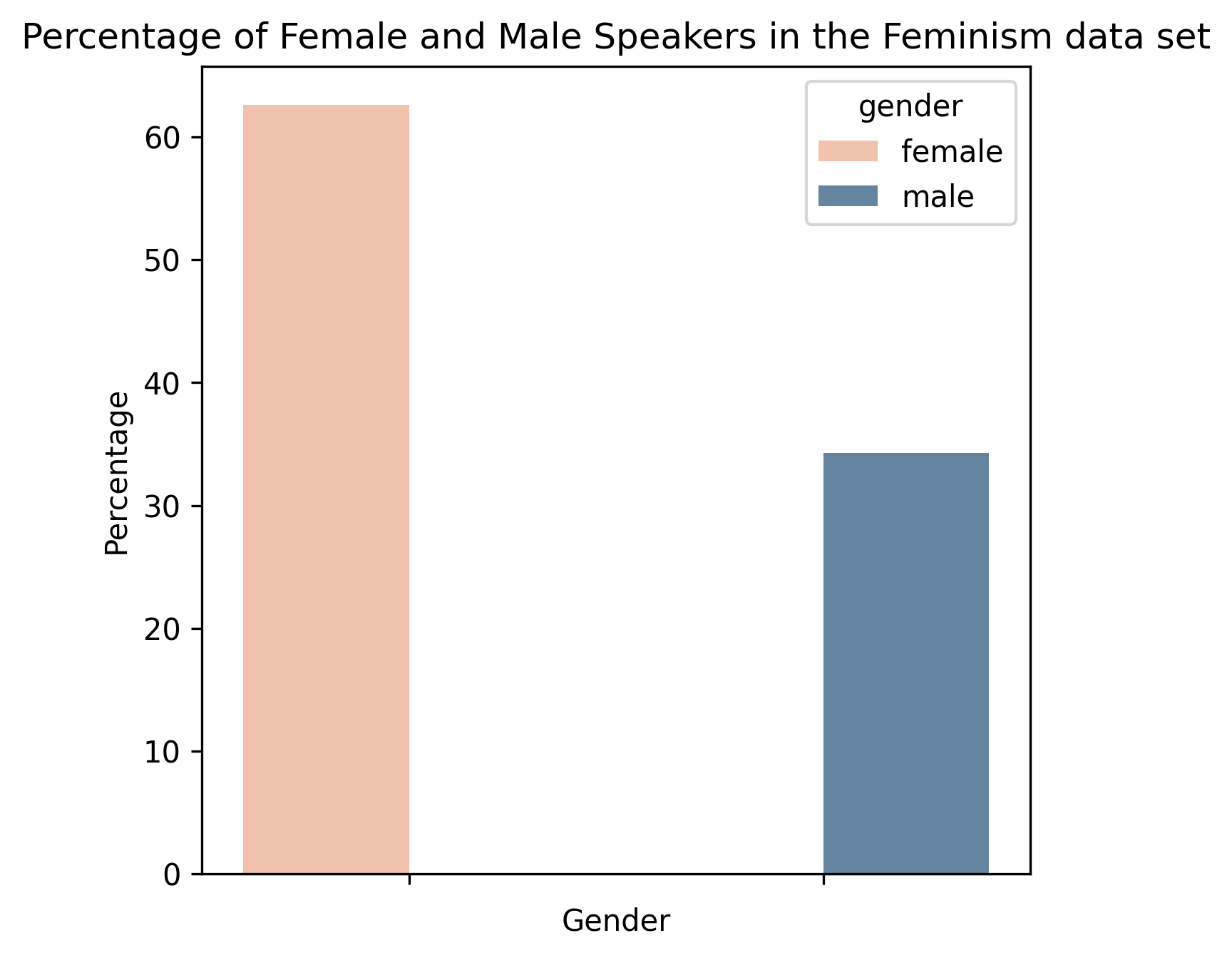 The situation switches in the case of feminism related quotes: the predominant gender is female. We suppose that women are more concenrned about feminism and its sub-topics, so they are the ones who are vocal about the related issues. As a consequence, medias cite them more often. Earlier we saw examples (Hilary Clinton, Emily Ratajkowski, Emma Watson) of women that express themselves on these matters.

Throughout this analysis we tried to use the Quotebank dataset in order to showcase the presence of feminsim in multiple media outlets. We saw that feminism-related quotes are most present in medias when major movements and events happen. Also, that some speaker in the right-wing medias talk a lot about feminism, but the intetion of the media in putting them forward may be negative. We discovered that many of the quotes expressed people’s opinions which led us to their sentiments that were mostly positive. Finally, we saw that the selected medias like to cite men more than women, but this aspect changes when feminism-related quotes are involved.